Start spreading the news. The New York Yankees, who have been cursed with more injuries than you can count on both fingers, have won 9 of their 11 games while borrowing the Scranton Wilkes-Barre RailRiders roster.

No Judge, no Severino, no Stanton, no Didi, no Miggy, no problem. After taking 3 of 4 at home against a scuffling Royals squad, the Yanks set out to the west coast, where they would take 3 of 4 against a scuffling Angels team as well, taking the first game in 14 innings, the second game in 9 innings thanks to 2 Luke Voit jacks and erasing a 5-0 deficit in the third game.

After spending the week in So Cal, the bombers headed to NorCal, in the Bay Area to be specific, to take on the San Francisco Giants at Oracle Park, not AT&T Park, Oracle Park. Although Oracle and T-Mobile may have bought out the Giants and Mariners, their ballparks will always be AT&T Park and Safeco Field to baseball fans.

On Friday night, the Big Maple, James Paxton, toed the slab by the bay, coming off two phenomenal outings at home, throwing 8 shutout innings of 2 hit ball and 6 shutout innings of three-hit ball, respectively, against the Red Sox and Royals. He would go up against Madison Bumgarner, who although will forever be remembered for his domination playoff performances, hasn’t been all that great in 2019, posting a 4.30 through his first four starts.

Paxton wouldn’t be lights out in this one, but he would get the job done, tossing 5 2/3 IP, allowing 3 earned runs on 5 hits on route to his third win of the month, as the Yankees bats would back the big maple, putting up 7 runs, including Luke Voit’s 9th inning 2-run blast off Mark Melancon over the centerfield wall. The bullpen would be shaky late, with Zach Britton walking the bases loaded in the 7th inning, after retiring the first two Giants he faced. Aaron Boone would turn it over to Adam Ottavino, who buckled the knees of Buster Posey on a 2-2 slider to leave the runners stranded.

It wouldn’t be polite if we didn’t mention Cameron Maybin’s Yankee debut too, as the 2017 World Series Champion picked up an RBI Single on the first pitch of his first at-bat in the 1st inning to give the yanks a 1-0 lead. Maybin was acquired as depth for an extremely depleted Yankees outfield that has Aaron Judge (Oblique), Giancarlo Stanton (Biceps & Shoulder), Aaron Hicks (Back) and Clint Frazier (Ankle) all shelved with injuries. Is it strength and conditioning? Maybe. Is it really bad luck? Maybe, but I think everyone is done talking about injuries. It was a good win all around on Friday night in San Fran, with Paxton continuing to pitch well, and Voit continuing to mash the ball (has reached base safely in 39 straight games).

It was a quick turn around, with a 1 pm start on Saturday with JA Happ on the mound for the bombers, looking to capitalize on his 7-inning start in Anaheim on Monday, and boy, did he ever capitalize.

7 innings of shutout baseball for JA Happ, finally picking up his first win of 2019, with the Yankee offense, once again, backing their pitcher, with 6 quick runs, capped off by the farthest hit Grand Slam in the stat-cast era, off the bat of Gary Sanchez, releasing the Kraken for his first career 4-bagger off Giants starter, Derek Holland. It wouldn’t be a Yankees win without a couple more Gio Urshela base hits, however, as the happy fella would tally three more hits, including a triple on Saturday.

Luis Cessa would replace Happ in the bottom of the eighth inning, throwing a scoreless frame, heading into the ninth. It would be the ninth inning, however, that Cessa would give every Yankees fan a heart-attack, giving up 4 runs on 4 hits, including two long-balls off the bats of Yangervis Solarte and Erik Kratz. Aroldis Chapman would have to come into this one to close the door, only throwing 4 pitches to get Pablo Sandoval swinging to salvage game two, and the series for the Yankees. It got stressful towards the end, but an all-around feel-good victory to take the series.

We would see a similar scenario on Sunday afternoon, with Domingo German toeing the slab against Ivan “Pudge” Rodriguez’s son, Dereck Rodriguez. German, who has pitched tremendously in the place of Luis Severino (4-1, 2.56 ERA), pitched good enough to pick up his 5th win on Sunday on route to a sweep in San Francisco. Just like in the first two games, the Yankees bats would beat up San Fran’s pitching, scoring 2 runs in each of the first two innings, including a Luke Voit 2-run single, to take a quick 4-0 lead. Gleyber Torres would turn a normal Sunday afternoon into “Gleyber Day” in the 4th inning, launching his 5th dinger of the season to left-centerfield. In wouldn’t be long before Gary Sanchez (7 HRs in his first 14 games) celebrated Gleyber Day, as the Sanchino would blast off to the ding-dong city, clearing the left-field grandstand, almost hitting the coca-cola bottle in the process.

Sunday’s win wouldn’t come without sacrifice, however, as it wouldn’t be a Yankees series in 2019 without a couple of injuries, am I right?

Both DJ LeMahieu and Gio Urshela would leave Sunday’s game, as LeMahieu was diagnosed with inflammation in his knee, while Urshela’s X-Rays came back negative after being drilled in the hand by a pitch from Nick Vincent. Both injuries don’t seem to be too serious, as Aaron Boone said he expects both men to stay away from the injured list. Although the injuries don’t seem too serious, the Yankees were left with no option on Sunday, but to pinch-hit for Domingo German, with JA Happ. Yup, you heard that correctly.

Just like in Saturday’s game, the Giants wouldn’t go down quietly, as they would cut the Yankees 8-0 lead in half in the bottom of the 6th inning, with Joe Panik, Pablo Sandoval, and Kevin Pillar all picking up RBIs to make it 8-4. Pillar would then send one into the seats in the 9th, however, the Yankees would prevail, breaking out the brooms in San Francisco, with an 11-5 victory.

The Bronx Bombers would tally up the bar tab by the bay, with 4 jacks at Oracle Park, which is pretty remarkable considering that the Giants have only hit 7 jacks at home all season. Cameron Maybin picked up another RBI on Sunday as well, with a double in the 9th, making the most of his stint in New York thus far.

Despite a few rough innings on the mound from Luis Cessa and Domingo German, there’s really nothing to complain about this weekend, as the Bronx Bombers showed up in full force, blasting four homers, with Luke Voit keeping his on-base streak (39) alive, along with 3 quality outings from James Paxton, JA Happ, and Domingo German.

The bombers now travel to Phoenix, Arizona, where they will take on a surprisingly-good Diamondbacks squad, that currently sits at 16-13, at Chase Field on Tuesday and Wednesday. CC Sabathia and Masahiro Tanaka will both look to bounce back after getting roughed up in Anaheim this past week, as they go up against Merrill Kelly and Zack Greinke. Start spreading the news, the Bronx Bombers are back. 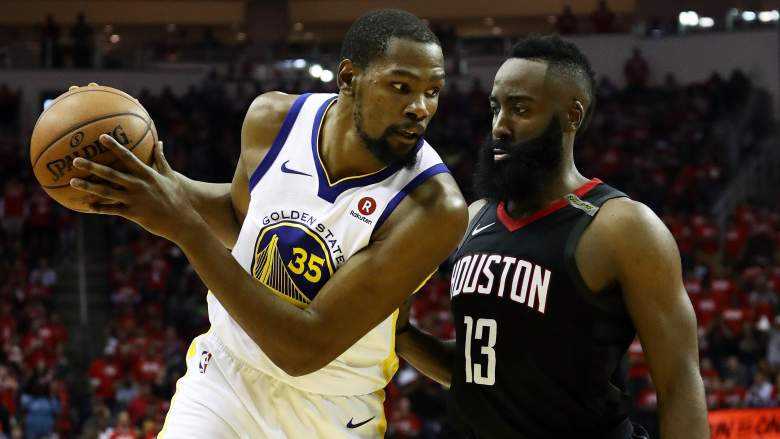 Run It Back: Houston Rockets Vs Golden State Warriors Preview