In this article, we will be finishing out our positional rankings for the NFC East. As we saw in the first portion of this, the Eagles and Cowboys have clear advantages on offense. Let’s see how the defenses compare though.

Another day closer to the NFL season everyone! Not that I’m counting the seconds or anything. Today is day two of OTA’s for the Eagles, if you want updates from day one, you can check those out here.

One thing to keep in mind in the NFC East between these teams on defense is their base set. The Eagles and Cowboys both run a base 4-3 defense, the Giants and Redskins work from a base 3-4 defense.

The Eagles have been known to have one of the deepest defensive lines in the league the last few seasons so it is no surprise to see them here. Even with the loss of Chris Long this season, this is a group that has the ability to dominate the division. Brandon Graham is the leading force here. His 42.5 career sacks are impressive.

What is more impressive is the number of QB pressures he creates, constantly keeping QB’s under duress. Along with Graham you have another second time player with Vinny Curry returning for 2019. An infusion of youth was welcome for the Eagles recently though, with second year DE Derek Barnett and rookie Shareef Miller. Interesting name to keep an eye on is Joe Ostman.

You will see one player in the list above has an asterisk next to their name. Randy Gregory. I included him because the Cowboys signed him to an extension through 2020, even though he can’t play. So until he is done fighting in the UFC and is back on the football field he isn’t being taken into consideration, but we don’t want to forget about him.

Aside from former football players turned MMA fighters, the Cowboys have an interesting group at DE. Like the Eagles they are lead by a veteran in Demarcus Lawrence. With 10.5 sacks in 2018 it is hard to think he won’t continue into 2019. Taco Charlton is another interesting young player with potential. He was a first round pick in 2017 and makes me want a Beefy Crunch Wrap Supreme.

The Redskins do have Matt Loannidis, and Johnathan Allen, but there is less depth behind them. These two DE’s did manage to combined for 15.5 sacks in 2018. Rounding out the bottom is the Giants. Without a clear leader, their most productive End was B.J Hill with 5.5 sacks last year.

Depth, how many times can you say it in an article? Whatever the answer, the Eagles seem to have endless amounts of it on their D-line. At DT Fletcher Cox and Timmy Jernigan return with Cox being one of the best in the league. Most offenses are forced to choose who to double team on the Eagles front four, generally it is Fletcher Cox. This opens it up for the endless number of other great linemen to rush the QB, even when only sending four rushers. The Eagles also brought in Malik Jackson and Hassan Rideway this year to shore up their inside rush.

Nose Tackles on a 3-4 defense are a bit different than a DT on a 4-3. Nose tackles tend to be bigger and are expected to eat up offensive linemen. Daron Payne is able to stop the run well, and still get a respectable five sacks in 2018.

Dallas is a close third place, Maliek Collins and Christian Covington provide a solid interior for the Cowboys D-line, but they don’t set the world on fire. Collins is only 24 and has plenty of time to develop but needs a jump in 2019 to make a bigger difference in the NFC East.

Things are ugly for the Giants on the D-line. The good news is the 17th overall pick went to Clemson DT Dexter Lawrence. There is a lot of upside here but he needs to prove himself at this level. In this case, Lawrence shows why he was worth a 1st round pick. The Giants can easily climb this list in 2019.

Can Sean Lee stay healthy? The answer is probably not. But that’s okay! The Cowboys now have Sean Lee 2.0, a.k.a. Leighton Vander Esch. Assuming he can stay healthy, mixing him in with Sean Lee and Jaylon Smith which makes for a linebacker group that can wreak havoc on opposing offenses in the NFC East.

The Redskins are lead by Ryan Kerrigan who managed 13 sacks, each of the last two seasons. Along with him rookie Montez Sweat looks to make an immediate impact, especially since the inside linebacker position has become a problem. This offseason the Redskins let veteran Zach Brown walk, leaving Mason and Reuben Foster. As you see, Reuben has an asterisk though. On Monday, he tore his ACL, officially ending his season, before it even started. The Redskins did sign Jon Bostic to fill the hole.

The Redskins loss is the Eagles gain. After the Eagles let Jordan Hicks go, it left a hole at MLB. Enter Zach Brown. After harassing Eagles QB’s for the past two seasons, Brown will now help solidify the front seven for the birds. Along with him, Nigel Bradham and former special teams standout Kamu Grugier-Hill will be the starters. One interesting player is TJ Edwards. The rookie LB out of Wisconsin was arguably the most productive Wisconsin linebacker in 2018, and excels at pass coverage.

The Giants once again enter at the bottom of the list. Don’t get me wrong, Alec Ogletree is a great linebacker. What the Giants do have going for them is youth. It is tough to say who may step up this season. This group has potential but needs to show it before anyone will believe in them.

Cornerback was a tough position to rank. Many teams have a clear cut No.1 cornerback, and each NFC East team has that, but beyond the No.1 it varies greatly. The Giants have Janoris Jenkins, but after that they are very young. Baker is a rookie first round pick, and Grant Haley is a second year player who only started nine games his rookie year.

The Redskins have the ever outspoken Josh Norman leading the way, and were also able to lure Domonique Rodgers-Cromartie out of a very short retirement. Again, after these two the proven talent falls off quite a bit. Fabian Moreau is the most likely to have a good year, with one interception and 58 combined tackles in 2018 over 10 starts.

The Eagles have about 9 million Cornerbacks after last season. Okay they have nine and most are versatile and can play in the slot or outside, and some even have time playing at safety. The clear cut No.1 is Ronald Darby. While he is probably the fourth best in the division, it’s the rest of the group bringing them up the list.

Most Eagles fans have a love/hate relationship with Jalen Mills, and nobody is exactly sure if Sidney Jones will live up to his draft day expectations. Avonte Maddox, Rasul Douglas, and Cre’veon LeBlanc really showed their unexpected ability in 2018. This was due to one too many Eagles DB’s going down with injury. It did however allow the birds to learn more about these young players.

The Cowboys have the best group of cornerback in the NFC East. Byron Jones leads the group, a 2015 first round pick out of UConn. He has started all 16 games the last three years. Along with him are 2017 second rounder Chidobe Awuzie and Anthony Brown, who has only missed one game in his three years with the Cowboys.

Another group where the NFC East is very strong is safety. Even being at the bottom of this list doesn’t mean they are a bad group. The others are simply better. Jeff Heath is a good safety and emergency Kicker for the Cowboys. Xavier Woods is also rather impressive, but they don’t compare to the other safety groups in the division.

Dave Gettleman strikes again! Letting Landon Collins walk to a division rival? Really? I get it, Antonie Bethea is good, and you lied to everyone about not trading Odell, but you did, and you got Jabrill Peppers. Peppers doesn’t compare to Collins though, so the Giants fall to 3rd at Safety.

Landon Collins! Well he walked to a division rival, the Redskins. Along with the young Free Saftey Montae Nicholson and 2018 4th round pick Troy Apke, along with Deshazor Everett, the Redskins look dangerous at safety. Mostly thanks to the possible development of their young players.

Another No.1 spot for the Eagles. Malcom Jenkins is part of the life blood of this Eagles team, and particularly their defense. He has the ability to play safety, linebacker, slot corner and outside corner. Jenkins can do it all. Rodney McLeod when healthy complements Jenkins well, but what really shows here is the versatile young players like Tre Sullivan. The Eagles also have Andrew Sendejo, though he may be gone before the season to keep compensatory draft picks.

Giant’s fans let’s talk, your team ranked last in every category, except safety. Which they were second to last. Maybe they will get a pleasant surprise from someone this year? The Redskins are slightly above them, but both 3-4 defenses seem like they may struggle. One major missing piece? Both are too weak at linebacker, and that is an incredibly important piece of the puzzle for this type of defense.

The Cowboys and Eagles are much closer. While they have the edge at linebacker and cornerback, but are weak at safety and defensive tackle. Even with a strong outside pass rush, it could be improved, particularly if they managed to get a player like Randy Gregory back, or if Taco Chorlton takes a big step this season.

The Eagles come out on top here. The best defensive line, both inside and outside rushers are incredibly strong and can rotate in and out to stay rested. The Eagles defensive backs are also strong, with the best safeties in the NFC East division, and cornerbacks that are above average across the board. The weak spot is linebacker, they made improvements this offseason, but will it be enough? Only time will tell.

The Eagles are the overall winners in the NFC East which arguably is the strongest defense, with only one major position to improve. They’re offense also edging out the Cowboys due to their multitude of athletic skill position players that they can spread the ball around to. Next we will be going through the schedules to see what records we may see in 2019. 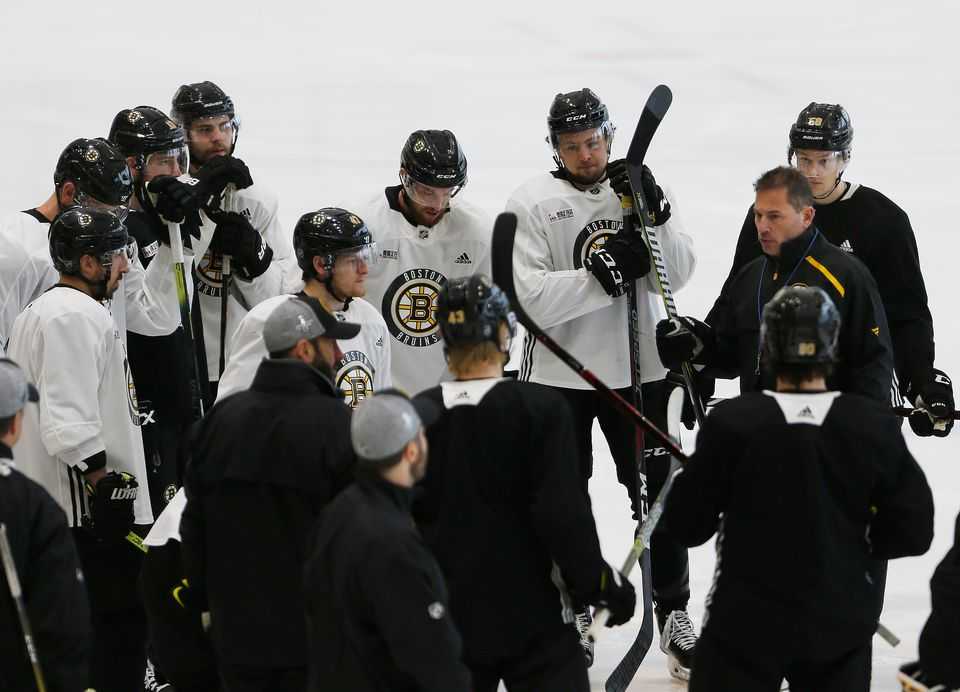 The Bruins Realized That the Only Worthy Competition For Them Is Themselves, So They’re Playing a Full Intrasquad Scrimmage