It’s been such an odd year in the NFL. Two “franchise” QB’s went on IR with Cam Newton and Big Ben. In addition to these two, Foles, Brees, and Mahomes were out multiple weeks. It seems the only constant in the backfield has been the running backs and teams need to pay good Running Backs.

First off let’s start off with the two “trophy boys” this season. The guys who should be getting MVP’s: Aaron Jones and Christian “Run CMC” McCaffrey. Both have been putting up insane numbers this year. McCaffrey with 989 yards and 11 TD’s while Jones has 589 yards and 11 TDs. Basically being their teams knock out punches to get their respective teams in position to make the playoffs.

Jones has been playing out of his mind with several multi-touchdown games and being Aaron Rodgers’s go-to weapon this season. The real deal, however, is McCaffrey. who has basically been the Panthers’ offense as they eased replacement QB Kyle Allen in for Cam Newton. The panthers would be a mess and definitely not even close to where they are now if it was not for Run CMC.

Now before I go any further I’ll address the elephant in the room: Todd Gurley. Yes, the Rams overpaid for a guy with knee arthritis. Yes, they should have waited a year, but this is the same team that just overpaid Jared Goff by a lot. The Rams have the most top-heavy salary cap in the league. At the time that Gurley got signed, he was dominating and honestly the only thing that Rams GM Les Snead did wrong was the salary per year, but they had to pay the team’s best offensive player.

Now going forward, teams need good running backs and they need to pay the. If they are good enough to deserve the pay. The Perfect example is my Philadelphia Eagles. In 2017 they had a 3 headed monster at halfback with former pro bowlers Jay Ajayi, LeGarette Blount, and rookie stand out Corey Clement. This squad helped Carson Wentz and then backup Nick Foles win the franchise’s first Super Bowl title.

The following year, Clement and Ajayi both were lost for the season and Blount signed with the Lions. The Eagles were left with undrafted free agent Josh Adams and draft bust Wendell Smallwood and it was not the same offense. With these two carrying the ball, the 2018 Eagles offense owed a lot to Zach Ertz and Alshon Jeffery. they were the only real great weapons in a semi-sluggish offense.

This season after a sluggish start Philly decided to take some of the load off Wentz and give it to a man who has been in the top 3 in rushing yards since 2016: Mr. Jordan Howard. Howard has been exceptional this year for Philly. Being the short-yardage back they have missed since Blount.

He has also allowed Philly to capitalize on this with play action to their amazing tight end duo of Ertz and Dallas Goedert. And like 2017, Philly is winning games without an elite deep threat. Now it’s the re-signing of Jay Ajayi and the emergence of explosive rookie Miles Sanders. This has the Philly backfield looking dangerous again.

If you need even more proof look no further than this year’s Baltimore Ravens. The addition of Mark Ingram has allowed Lamar Jackson to command a lethal running attack. Also if you still don’t believe that these Backs should get paid. Look at the reigning champs, who rode Michel, Burkhead and “Sweet Feet” White to a Super Bowl.

The one lesson to be learned here, is if you have a running back that can produce…. pay him! If there is one in the draft, draft him. Passing is pretty but it doesn’t keep your defense off the field. 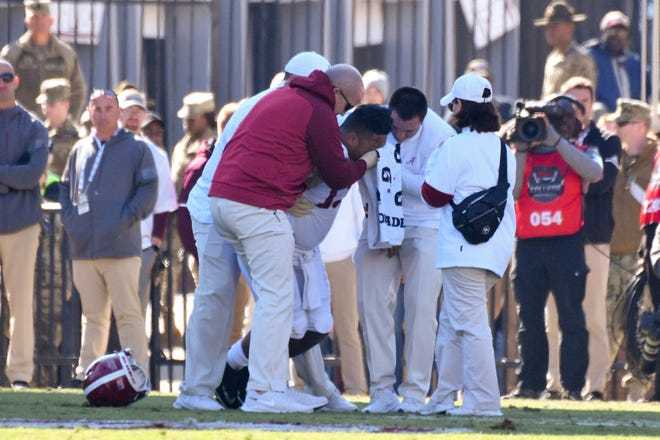 Where Do We Go From Here: Tua Tagovailoa’s Future