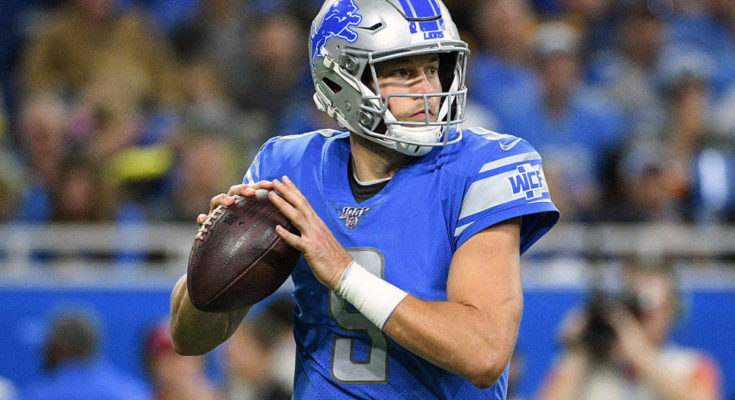 Nothing gets people going like a little football and Shakespeare, an all-time classic duo, right up there with PB & J. That being said, let’s get into, “A Modern Tragedy: The Career of Matthew Stafford”.

There are nine elements that the great William Shakespeare employed when crafting his Five Great Tragedies (Othello, Romeo and Juliet, Hamlet, King Lear, and Macbeth). All of these tragedies featured the following nine elements in some capacity:  A Tragic Hero, Comic Relief, “Hamartia”, Supernatural Elements, Internal and External Conflict, The Struggle Between “Good” and “Evil”, Tragic Waste, Lack of Poetic Justice, and Catharsis.

Matt Stafford has been criminally underrated his entire career. He’s produced high volume statistics throughout his time in the NFL. Whether it be his lack of playoff success, his lack of accolades, or any number of other reasons, the NFL community has never coveted Stafford like they do other elite quarterbacks. It’s not a coincidence that Stafford wears the number nine, the same number of elements that are featured in a Shakespearean tragedy. His career is the modern embodiment of all nine aforementioned elements, and while it isn’t yet over, the writing is very much on the wall.

Enter our hero, a young Matthew Stafford. Young and full of hope, he was the first overall selection in the 2009 NFL Draft by the Detroit Lions.

The best quarterback in Lions franchise history from a win/loss record and a statistical standpoint at this point was Bobby Layne. The Lions went on to trade Bobby Layne to the Pittsburgh Steelers during the 1958-59 season. His response to being traded was that the Detroit Lions wouldn’t win a championship for the next fifty years, and thus began “The Curse of Bobby Layne”. Layne’s proclamation was accurate to a point, but the next fifty years were worse than even he could have imagined. Winning seasons were few and far between for the next fifty years, with several tangible moments of the curse’s negative impact.

Shakespeare’s Tragic Heroes have their fates predetermined, just like the Detroit Lion’s franchise from 1958-2008. Sadly, “The Curse of Bobby Layne” has plagued this franchise longer than the presumed fifty years. They haven’t come close to a championship since the 2008-2009 season, only making the playoffs three time since then. “The Curse of Bobby Layne” still has a strong grasp on the Detroit Lions franchise today. Matt Stafford’s success in his career, his fate, is/has been predetermined due to the strong and lasting effects of this curse. He even graduated from the same high school as Bobby Layne,  Highland Park High school. His success was already capped, completely out of his control, once drafted by the Detroit Lions. He can only achieve a certain level of overall success as a player while being in this organization.

One of the tangible moments from “The Curse of Bobby Layne” came in the form of Comic Relief. Comic Relief for the NFL audience, and the Lions franchise themselves, came during the 2008-09 season. During the infamous 0-16 season, Dan Orlovsky stepped out of the back of the end zone for a safety, putting an exclamation point on a horrific season for the franchise. A play so bad that it brought comedy to such a dismal and cursed last fifty years. Dan Orlovsky himself still makes jokes about it to this day.

Shakespeare’s “Hamartia” is defined as a single flaw that most detrimentally affects the hero. Part of what makes Stafford so great is his ability to freelance, the ability to break from practical mechanics to make a great play. While he does get away with this most of the time, there has definitely been a fair share of games throughout his career where this style blew up in his face. Again it’s very rare, but when he does have the occasional bad game it is due to these inconsistent mechanics. Inconsistent mechanics is Stafford’s “Hamartia”.

As for additional Supernatural Elements in this tragedy look no further than Calvin Johnson Jr. aka “Megatron”. Superior athleticism, unlike anything we’ve ever seen, all packed into his 6’5” 240-pound frame. We all know this guy was superhuman. Need I say more?

The external conflict with Stafford is clear. Name the fastest player to reach any amount of yardage? It’s Stafford. He holds records on records, but none of that seems to matter to the NFL community. In 2011 a 23-year-old Matthew Stafford was third in the league in passing touchdowns with 41, threw for a staggering 5,038 yards, while having 16 interceptions, but it wasn’t enough for a Pro Bowl nod. His lone Pro Bowl came in 2014 when he threw for 22 passing touchdowns, 4,257 passing yards, and 12 interceptions. Out of all the full seasons he’s played, this was definitely one of his worst. Does it make sense he made the Pro Bowl in 2014-15 season instead of 2011-12 season? Of course it doesn’t.

The constant shattering of records, years of producing high volume statistics, but still have the same amount of Pro Bowls as Mitchell Trubisky? The lack of recognition from his peers and fans is his main source of external conflict.

The internal conflict within Stafford can easily be assumed based on his external conflict. The feeling of disrespect from the NFL community can lead him to moments of questioning his standing as an elite quarterback. He’s forced to be in the same division as Aaron Rodgers, and because of this people will never consider him the best quarterback in his own division. The need to continually press on year after year, trying to prove that he is in the elite tier of quarterbacks, that he can in fact be compared to Aaron Rodgers, can no doubt become mentally draining. The constantly forced juxtaposition with elite quarterbacks causes his internal conflict of self-doubt.

The Struggle between “Good” and “Evil”

The struggle between “Good” and “Evil” derives from his predetermined fate. The “Evil” aspect being succumbing to the predetermined fate of mediocrity, the fate of being the quarterback for the Detroit Lions. It would be easy for Stafford to give in to his predetermined fate, to accept the fact that his success can only attain a certain point. The “Good” aspect is that he has a chance to change his fate. He churns out great years over and over again, trying to channel this good energy to combat the “Evil” that being a Detroit Lion brings.

The “Good” and the “Evil”, on top of the external/internal conflict, will only end when Stafford moves on from the Detroit Lions or ultimately retires. This is part of the definition of Shakespeare’s Tragic Waste. The other part of this definition is the loss of life, but in this case, it is loss of a better career. All of this effort, years of fighting to rise above the fate of the Detroit franchise will all be in vain for Stafford. There is nothing he can do to escape the curse of this franchise. There is no happy ending for Stafford on the Detroit Lions, fate has determined so, and this is Shakespeare’s Lack of Poetic Justice.

Finally, this leads us to the final element of a Shakespearean Tragedy; Catharsis. Catharsis is the empathy we feel towards our Tragic Hero. I feel tremendous pain for Stafford. The lack of respect, the lack of recognition. Pouring out great seasons while being one of the only shining lights for a franchise so dim. The fate of the Detroit Lions can very well be predetermined, but they themselves have done very little to fight it. Sure, Stafford has had weapons to pass to, but with only one thousand yard rusher in his tenure under center, he has had to shoulder the load of the entire offense.

As an audience watching “A Modern Tragedy: The Career of Matthew Stafford” play out it is impossible to not feel bad for this guy. I hope that he can rise above the ineptness of this franchise, and the predetermined fate that they have been subjected to. Being that this is a Shakespearean Tragedy we know that there can never be a happy ending for Matthew Stafford as long as he is a Detroit Lion.