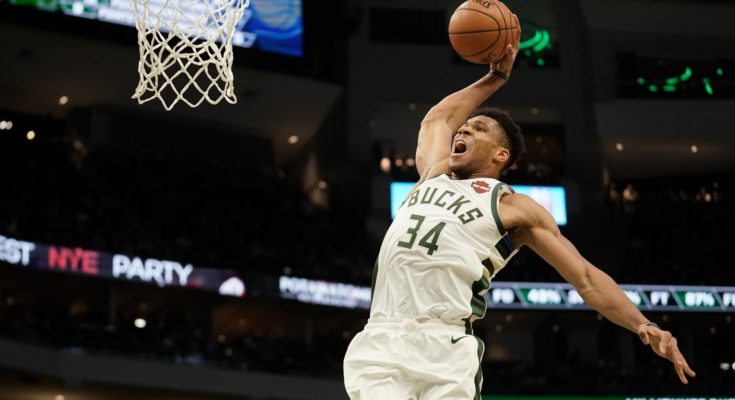 Do you want to make some predictions on the NBA bubble seeding games? Download PropMe from the Google Play Store or Apple App Store and join The Belly Up Sports NBA Bubble Contest. It’s free to play and you can guess if the Bucks will make more 3-point shots than Giannis Antetokoumnpo has dunks in the Bucks televised games, and so much more. The winner will receive $50, merch from the Belly Up Store, and be invited to be a guest on the Hardcourt Hunnies podcast!

Despite their lack of playoff experience, the Milwaukee Bucks are the most popular pick to make it out of the Eastern Conference. The Bucks currently sit at 53-12 prior to bubble play, very much replicating the tremendous success they had during the 2018-2019 regular season. The Milwaukee Bucks franchise hasn’t been to an NBA Finals since the 1973-1974 season. The astounding progression of Giannis Antetokounmpo, with aid of a perfectly crafted supporting cast, has the Bucks chasing heights they haven’t dreamed of in decades.

Last year’s MVP Giannis has shown growth in his game once again, increasing his PPG to 29.6 and his total rebounds per game to 13.7. While he does rely heavily on his superior athleticism, as he should, he has begun to show progress in shooting from beyond the arc. He’s taking more, and he’s making more. He’s making around 30% of his 4.8 attempted three-pointers a game, an improvement from last year, but still, nothing to write home about. The rest of the league is already terrified of “The Greek Freak”, now he’s trying to add some range? Jeez, watch out for the years to come. Looking to win his second MVP in as many seasons, the hopes of the Bucks franchise fall onto his shoulders, but he isn’t alone.

How do you compliment an athletic specimen who relies on getting to the rack? You surround him with reliable shooters, players that can stretch the floor, and guys he knows he can trust. Milwaukee Bucks’ General Manager Jon Horst has done just that. He’s done a fantastic job building upon the work of long-time Bucks General Manager John Hammond.

Khris Middleton is a star in his prime coming off his second All-Star game appearance. He’s shooting a career-high 49.9% from the field this season, on top of shooting a career-high 90.8% from the charity stripe. Reliable? Surely, more so now than ever. Veteran Eric Bledsoe isn’t the same player he was a few years ago, but his 15.4 PPG and 5.4 APG, still have him locked in as a quality starting point guard. Brooke Lopez’s three-point success has cooled off this year, but he’s still a threat from deep, as well as from inside the arc. Wesley Matthews could be the lone weak spot on this starting line up, but he still has some game. Luckily Horst has also valued depth when crafting this Eastern Conference juggernaut.

The Bucks have a perfect blend of experience and youth when it comes to their bench. George Hill, Marvin Williams, Ersan Ilyasova, and Robin Lopez all bring experience and reliability to the table. Kyle Korver is a veteran sniper, still shooting 41% from beyond the arc this season. They also have young contributors like Sterling Brown, D.J. Wilson, Dragan Bender, and Frank Mason.

Donte DiVincenzo and Pat Connaughton, are “juice” guys. They’re spark plugs when they get on the floor. While their statistics aren’t off the charts, the intangibles and effort they bring to the table are crucial to this team’s success. They even have Thanasis Antetokounmpo, Giannis’s brother, to round out the roster and add even more chemistry. The variety of skills these players present Head Coach Mike Budenholzer gives him tremendous flexibility when game-planing. All of them have a niche, and they all have contributed to this team’s success.

The Task at Hand

Taking a look at the schedule for the Milwaukee Bucks, there’s no reason we shouldn’t expect more of the same. They’ve beaten each of these teams at least once already, with the exception of the Miami Heat, who they’ve lost to twice. With solid control over the first seed, they could win half of these games and still remain the top team in the Eastern Conference. With teams like Boston, Toronto, Philadelphia, and Miami in their way, it’s for sure no easy path. However, it’s nothing like the gauntlet of the Western Conference. The Bucks have given us every reason to believe that they are the real deal. Whatever battle-worn team that survives the West might get caught slipping en route to the Bucks hoisting their second-ever Larry O’Brien Trophy.