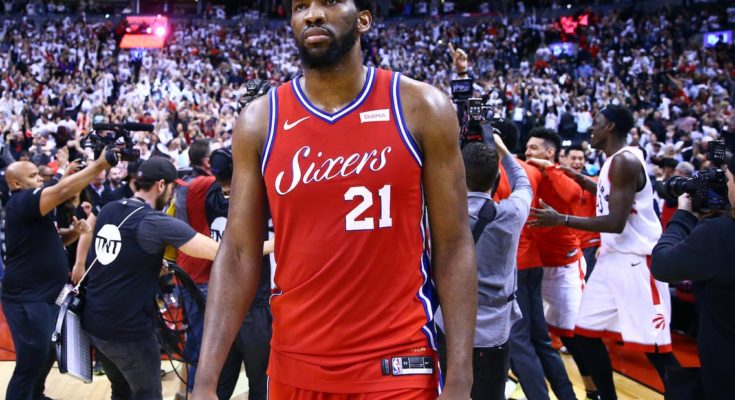 To “86” something essentially means to end it, or to cancel it. There’s a few possible origins of where this term came from. The Philadelphia 76ers fired head coach Brett Brown Monday, a sign that “the process” has come to an end. It’s time to “86” the “trust the process” era of the Philadelphia 76ers organization, but there’s more to moving on from it than just firing the long time head coach that was tied to it.

“Trust the Process”. The mantra of The Philadelphia 76ers for most of this past decade. A phrase used to unite fans, a badge of honor, a belief that there is a light at the end of the tunnel. Sam Hinkie assumed the general manager role following the 2012-2013 season, in which the 76ers went 34-48. Stuck between the best teams and the worst teams, they weren’t making the playoffs, and they weren’t getting high draft picks. When Hinkie took over he decided that he didn’t want to waste anymore time being mediocre. The only way to new heights, was to bring the organization to new lows. His plan was simple; tank for however long until he felt they had enough young quality players to make a run.

Tanking, this “trust the process”, philosophy was nothing new. The novelty of this idea came with how outward and public Hinkie was about it. He went right to work implementing his plan. On draft night in 2013 he shipped out Jrue Holiday, Nerlens Noel, and a 2014 first round pick. The team would go on to select Dario Saric with the twelfth pick in the 2014 draft. The highlight of Hinkie’s tanking process came with the selection of Joel Embiid with the third overall pick in the 2015 NBA Draft. Hinkie had been dedicated to “the process”, but eventually he decided to resign. The team wanted to win now, they were tired of losing, so they brought in Jerry and Bryan Colangelo.

An embarrassingly terrible 2016-2017 season, with a record of 10-72, led them to selecting Ben Simmons with the first overall pick in the 2017 NBA Draft. He would go on to miss the 2017-2018 season due to injury, but the cast of role players that took the floor were able to improve the team’s record to 28-54. Though Hinkie was no longer with the team, the vision of his process was beginning to come to fruition.

During the 2017-2018 season the 76ers, once considered the laughing stock of the league, were now a formidable opponent. They finished the season with a 52-30 record, a tremendous improvement from the years prior. Ben Simmons was proving to look the part of an incredible floor general. He couldn’t shoot, but he really excelled at every other aspect of the game. Simmons could get to the rim, create for others, rebound, and play defense. He was even being called the next Lebron James! Joel Embiid was also becoming a monster in his own right, quickly becoming one of the best centers in the league. The 76ers now had hope in these two budding superstars. They would go on to lose in the Eastern Conference Semi-Finals, only just a few years removed from going 10-72. A massive improvement.

“The Process” was in motion, but could they build upon it enough to propel them to championship heights? They added Jimmy Butler and Tobias Harris for the 2018-2019 season, but all it did was bring them back to where they finished the season prior. With perhaps the most talented roster on paper in the East, they fell in heartbreaking fashion in the Eastern Conference Semi-Finals to the Toronto Raptors. While they hadn’t progressed, they didn’t regress, which was somewhat of a plus. The 2019 offseason brought a lot of change. Butler was off to the Miami Heat in a four team trade, Tobias Harris received a lucrative deal, Al Horford was signed, among a few other offseason moves.

Despite all this change, two constants remained, Embiid and Simmons. These two young superstars were entering this season with high hopes of challenging for the Eastern Conference throne. Supremely talented stars, it was time to prove that “trust the process” was more than a mantra. It was time that they became a championship team, or at least a conference finals team. Simmons missed the first round of this year’s playoff due to injury, and the 76ers ended up getting swept by the Boston Celtics. While in years passed they at least made it to the second round, this year they fell well short.

While not having Simmons was definitely a major factor in their first round exit, there’s more to it. If they did have Simmons maybe they don’t get swept, but they definitely still lose the series. A team like the Boston Celtics is built perfectly to overcome a team like the 76ers. They have elite wing play, fantastic guards from an offensive and defensive standpoint, and tremendous team chemistry. Are their two most talented players more talented than Embiid and Simmons? Maybe, but doubtful. Danny Ainge has surrounded them with other pieces to amplify their strengths, something that Elton Brand has failed to do.

There are several teams better than the 76ers in the East now, most of which will continue to be better than them for years to come. I do believe “the process” was very close to hitting perfectly, with a couple different draft picks and signings, it all could have been different. That being said, at this point, the process is over, it has essentially ended. The writing is on the wall, if their current roster returns next year, they won’t make it past the second round. They should “test the waters” for all of their players, Simmons and Embiid included. They are tremendous players in their own right, but with them as the alpha dogs, the team has hit a plateau.

The answer to fixing their woes isn’t to restart the process, but to pick up from where it has ended. They are a really good team, they just aren’t great. To become a great franchise takes some risk and some luck. It won’t be easy to let one of these guys go, but something has to be done. Now is the time to take risk, another year of a first or second round exit isn’t enough anymore. If they want to keep both stars that’s fine, it would just make it impossible to acquire other good players, and in that same vein, a different outcome. Moving one of these guys could end up not working out, but at least it offers you unknown possibilities. The 76ers have to move on from this experiment, it is the only way to achieve the next step as a franchise.

For even more breakdown of what’s next for the Sixers, listen to the NBA Morning Deuce, hosted by Joey Levin. The deuce covers everything you need to know about the NBA, Monday through Friday!

One Comment on “The Philadelphia “86ers”: End of the Process”