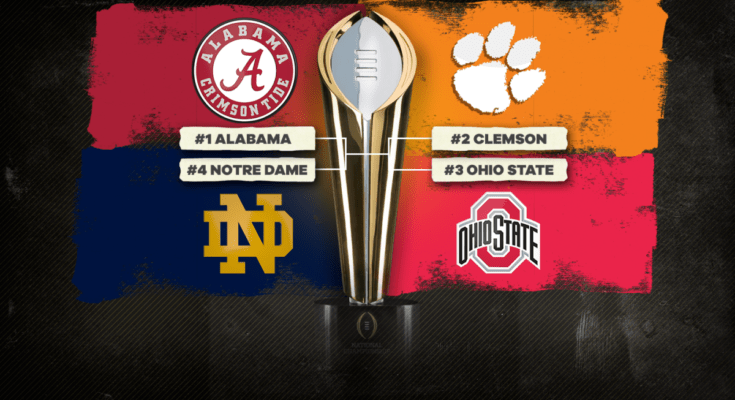 The college football playoff rankings are out and oh boy, the committee is on crack. There’s just no ifs, ands, or buts about it. The only way they could possibly have put worse rankings together is if they took their crack, mixed in a little heroin, and had a John Belushi-style party. I digress, let’s get into these rankings line by line.

Call me biased, but they got this one right. Alabama is the only undefeated Power Five team. They also have three guys on the Heisman watch list. Yes, this defense is one of, if not the, worst Alabama defense under Nick Saban (buy a shirt). On the flip side, it is one of, if not the, best offenses under Saban. It frankly does not matter if you put up 40, these guys will put up 50.

Verdict: They got it right.

Yes, Clemson lost to Notre Dame earlier in the year. Yes, Dabo is an idiot and should probably shut up sometimes. However, this Clemson team made me look like an idiot and dismantled Notre Dame in the ACC Championship. They should be in the final four of the college football playoff rankings, and it’s not really up for debate.

Verdict: They got it right.

Ah, Ohio State. The team that was gifted a Big Ten Championship berth after only playing five games. Their best win was a seven point victory over Indiana (they are currently ranked higher than Northwestern and were before this weekend.) Should the Buckeyes be in the CFP rankings? No. Are they good enough to be in? Maybe, we don’t know, they only played half a season. No team that has only played six games should be in the college football playoff.

Verdict: Nope, get them out.

After running through the ACC this year, Notre Dame was dominated in the ACC championship game. They only dropped two spots, and it raised some questions. Most notably, should we look at the entire body of work, or punish them for getting blown out. If it was a close loss, I’d say this is one of the four best teams in the country, no doubt. But that didn’t happen. If they play Alabama close, it will look like a genius move from the committee. If it’s a blowout, they’ll get blasted.

This gives us Clemson-Notre Dame round three. If Clemson won both, then Notre Dame would have no chance to be in. However, maybe we’ll get the Notre Dame we saw in November, and it’ll be a game.

Jimbo Fisher and Aggies fans everywhere thought they should be in. He clearly doesn’t agree with the Ohio State selection, but let’s look at A&M’s résumé. Yes, they won seven straight SEC games. They beat the (now) seventh ranked Florida by three, but got smacked by Alabama 52-24. However, A&M played a full schedule, won eight games, and their only loss was to the number one team in the country. That’s not a bad season. With Ohio State out, they should be third or fourth, depending on where Notre Dame gets put.

Verdict: Hell no. Put the Aggies in!

The Bearcats should be sixth.

Verdict: Group of Five Teams are Teams too.

What Does This Show Us?

The College Football Playoff rankings are stupid. However, that’s not just an issue for this year. I didn’t write this to just complain about the rankings. I also did it to call for an end to expansion talk.

Some people, including myself, have called for expansion in the past. You know what that gets us? More blowouts in the first few rounds, and then fatigued teams in the championship. No one wants that! There are, at most, three teams every year who have a legitimate chance to win the college football playoff. It’s going to be Alabama vs. Clemson round billion, and we don’t need two more games to figure that out. Bring back the BCS, it had a better trophy anyway.

Ohio State fans, go yell at me on Twitter (@BellyUpKev) and be sure to follow @BellyUpFootball on twitter to stay up to date on the CFP.