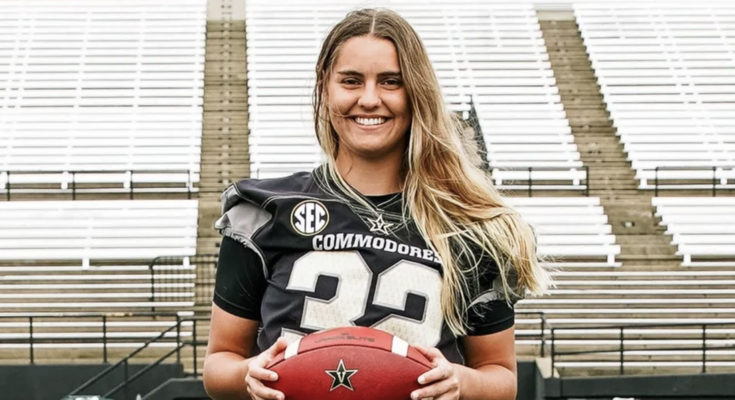 She Hit a Big Fat Nerve

The men (not all men) need answers. They need to complain that she didn’t belong there. They need to reassure themselves that they could’ve done a better job. Because they have something that she doesn’t… the instrument that guarantees athletic superiority, even in the most devout couch potato.

One kick does not define a football player just as one at-bat doesn’t define a baseball player and one shot doesn’t define a basketball player. Unless that player is a woman. No matter that this woman seamlessly executed the exact type of kick that was planned. Good for her, but that kick was probably selected because she wasn’t capable of much else. A fault, no doubt attributable to her missing member. So she mimicked what great athletes do and she played to her strengths. That leaves us wondering what male role model she learned that from. Regardless, her performance was quite a testicle spectacle.

But does the world have to call her a football player now? She is on a Division I football roster, and she did in fact commit the act of playing football. Does her femininity not disqualify her? Can she really be more of a football player than men who don’t play football? Where can we pinpoint her on this scrotum spectrum? These are the ponderings of a world turned on the tip of its head.

Why, God, Why Did This Happen?

The NCAA is about equal opportunity. Under Title IX it allows women to play in men’s sports when an equal sport for women is not offered. A woman is entitled to the opportunity to try out for any sport. And that’s what Sarah did after the Vanderbilt football team was left with a shortage of kickers, due to complications with COVID-19 protocol. So they asked Sarah if she would kick for them, and she had the balls (figurative, of course) to say yes.

But another reason why this happened is that it should. Because Fuller is an awesome athlete who was more than capable of doing what was asked of her. Because it’s a cool thing in sports history to happen, regardless of her performance, which was deemed pretty solid by former and current NFL players. She’s not the first woman to play football and she won’t be the last, but she’s the one on SportsCenter right now and deservedly so. Ain’t that a pisser!

Lastly, sports are a celebration of human capability. If women aren’t a part of that, it’s just a sausage fest.

If you tolerated my Johnson jokes, check out the more sophisticated humor that Belly Up has to offer!

View all posts by Sarah Edwards →

2 Comments on “Sarah Fuller: Kicks One Ball, Breaks Many”