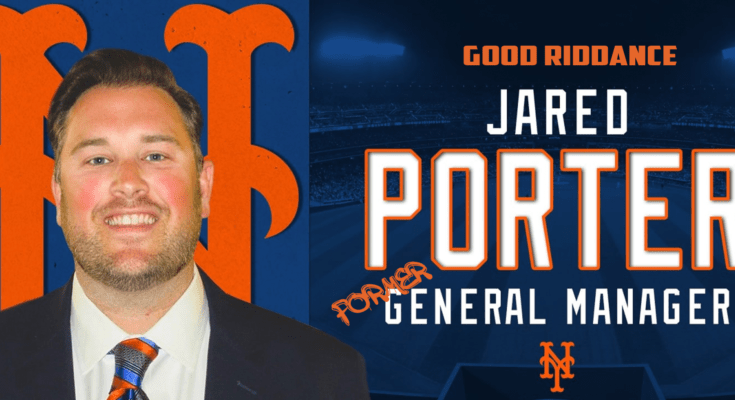 Life was good at Citi Field for the first time in a while. The Wilpons are out, Pete Alonso is a young star, and Francisco Lindor is settling into Queens as we speak. It even appeared the Mets had their GM in Jared Porter, hoping to keep the front office together long term. However, this bright future came to an end when Jared Porter got an unlimited texting plan, and oh boy, that man is a danger to society.

Porter would send 62 unanswered texts — including seven photos — between July 19 and Aug. 10, the day before a final flurry from Los Angeles…

Goddammit Jared, get a hobby. You’d think between text 30 and 33, you’d think he’d get the message. “Well maybe she was just really busy for the past month, let’s fire off one more text to be sure.” Now look, we’ve all been in a situation where you have a few drinks, text someone you probably shouldn’t, shoot off an apology text the next morning (or just act like it didn’t happen.) But Jared decided not to go that route. His texts started off… weird, but nothing too bad. Started off with work, then goes to this:

Which, like I said, is weird and probably shouldn’t have been sent, but if they ended there it’d be fine. Unfortunately, they didn’t.

Of Course Dick Pics Were Involved

It’s a tale as old as time. Jerk in power finds a young woman who is trying to navigate the World, and then he sends her a dick pick. I’m confused why Jared thought that was a good idea after 62 unanswered texts! Or even after one answered text, just don’t send unsolicited dick picks. I don’t care if you’re an CEO at a Fortune 500 company, a young executive in sports, or Joe down at the 7/11, just don’t do it. I promise you it won’t end well.

There’s a blurred version in the ESPN report, go look there, I don’t want that on my computer.

There’s a Kind of Happy Ending

We have terminated Jared Porter this morning . In my initial press conference I spoke about the importance of integrity and I meant it.There should be zero tolerance for this type of behavior.

This morning, the Mets announced they had fired Jared Porter. Good for them, this is the right stance to take for Cohen. However, this is only kind of a happy ending for a few reasons. One, Jared Porter is a danger to society and deserves the chair. That man is clearly unhinged, and the Mets firing him is not enough.

The other reason has to do with the reporter. Do you know what she’s currently doing? Working in finance in her home country. While she says this was not the reason she left the industry, this encounter caused her to rethink her life and return home. Where that home is? I do not know, she wanted to remain anonymous due to fears of backlash. So, while the piece of shit who did this will probably have a new job in a couple of months, she felt she had to leave the country and find a new career.

The Cubs Deserve Plenty of Blame As Well

While I am hammering Porter for this, let’s not forget the Cubs. Porter was working for the Chicago Cubs when this happened. The reporter says she spoke with a member of the Cubs organization, as well as a Cubs player from her country. When saying she was thinking about a lawsuit, the Cubs employee allegedly got agitated at the thought of this (although he denies this). The Cubs, shockingly, claim they had no knowledge of this incident, and it was never reported to them. I’m not going to entirely blame the Cubs, as it is entirely possible the employee she spoke to never reported this to anyone in the organization. If that’s the case, that man had better be applying for unemployment as we speak. Otherwise, the Cubs are just as complicit as Porter.

You may have noticed I did not say this “allegedly” happened. Well, that’s because Porter admitted it. Let me know what you think on Twitter (@BellyUpKev) and let’s make sure Jared Porter stays public enemy number one.