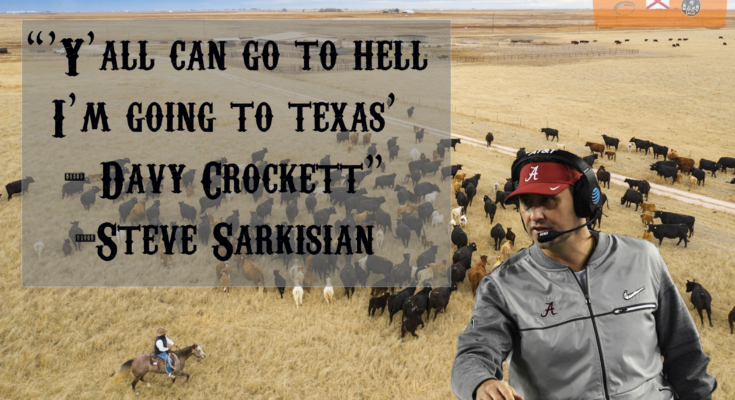 We all knew this was a possibility. We didn’t want to admit it, and it appeared as if Steve Sarkisian might stay in Tuscaloosa after he blew off the Auburn interview. However, we all came crashing back to earth with the news this morning. After the firing of Tom Herman, it is being reported that Steve Sarkisian is going to Texas as their next head coach. Or… not?

What Sark did at Alabama

Let’s just assume David Pollack is an idiot (I already think that most of the time) and just assume he’s gone. I committed to writing this when that tweet went out, so.

Steve Sarkisian revolutionized the Alabama offense. I know, Lane and Dabol started the process with Tua, but Sark perfected it. Alabama has scored less than 35 twice during Sark’s tenure: the 2016 National Championship, and the Rose Bowl last night. Both times they scored 31, and in 2016 that was Sark’s only game as OC after the Lane Train went to FAU. This year especially, however, is the most impressive job I’ve seen a co-ordinator do. Alabama lost its starting tackle, starting QB, and two starting wide receivers to the NFL Draft (all in the first round), as well as another wide receiver due to injury.

Alabama did not miss a beat. They have two Heisman finalists and one of the best Alabama offenses ever. For his efforts, Sarkisian won the Broyles Award as the best assistant coach in the country. And Alabama needed it this year, with their poor defensive play. It’s not surprising Sarkisian is going to Texas after his great job as OC. This timeline, however, has been wild.

On December 18th, the day before the SEC Championship, it was reported Sarkisian would interview for the Auburn job. Some called it a risk, but all-in-all it was heralded as a good potential hire. Alabama fans weren’t happy, but remembered Coach Saban’s record against former assistants and moved on.

Not So Fast, My Friend

On December 22nd, Steve Sarkisian reportedly said “thanks, but no thanks,” and turned down the Auburn interview. The Auburn head coaching search was a disaster from start to finish, and it wasn’t too surprising it got even weirder.

Silence on the Eastern Front

After the SEC championship game, there wasn’t much news about Sarkisian departing. However, while the eastern front was silent, the concern came out west. This morning, the Texas Longhorns reportedly fired Tom Herman, and it was announced Sarkisian was in line to take the Texas job. Alabama fans mourned, and started going through the stages of grief.

After Pollack’s report, it appears as if we are in the first stage: denial.

I would love it if Sark stayed, but I am also prepared to accept he is leaving. This is only getting weirder, and I’ll probably have to update this 20 times before the day is over. Especially when reports like this come out as I’m writing it:

I'm told that as of this moment, Texas is planning a Zoom call today with a new coach, expected to be Sark. But it's 12:18 p.m., so keep checking, I guess.