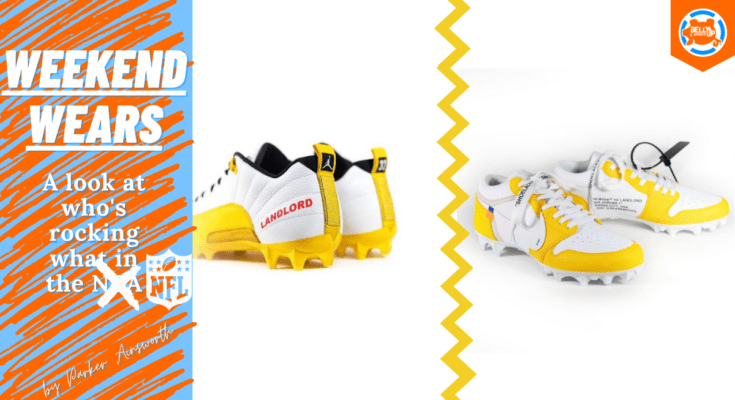 Yes! This is a special edition of Weekend Wears looking back at the special Super Bowl cleats worn by the Kansas City Chiefs and Champa -er, we mean Tampa Bay Buccaneers this weekend. While these may look like sneakers in some cases, these are all functional football cleats.

Cleats have been slower to the shoe game because, frankly, they get dirty. A classic Mud Bowl can ruin a pair of kicks in a way that a basketball game cannot. As more and more players are getting big-time sneaker deals, those sponsorships are providing more cleats and more games are moving indoors you’re seeing a greater influence of the sneakerheads in football.

Football players have always been sneakerheads off of the field, but rarely have they been this openly infatuated on it. In large part, this has been an intentional movement. Since the 2016 football season, when Air Jordan sponsored the Michigan football team, you’ve seen a serious uptick in footwear. What used to be reserved for unique guys like Randy Moss or Michael Vick, when they played on astroturf, is now common for Nike and Jordan brand football players. Currently, the Jumpman has 23 (supposedly unintentionally) NFL players and five major football programs under their logo.

Air Jordan athletes are not the only NFL kicks worth commentating on, but the inclusion of retro silhouettes has certainly changed the game. Let’s look at what was on the football players’ feet this weekend.

Frank Clark may be a man after my own heart. Who could forget the red and white Jordan 17’s? They came in their own miniature suitcase! They were one of the swaggiest pair of shoes you could find in 2002, and they found their way onto the football field with Michael Vick. Vick famously wore these when he played on turf… in perhaps no more recognizable a run than when he ran through the Minnesota Vikings for an overtime win. You remember- the play where the Vikings tackled each other and not Vick?

The Big Game didn’t go Clark’s way, but the kicks did help get him a sack on Tom Brady.

Tyrann Mathieu’s Super Bowl headlines have been, mostly, his run-in with Tom Brady at the end of the second quarter. The two had a brief scuffle that led to a personal foul penalty on Mathieu (but not Brady).

On his feet, Mathieu showed off his options (a Jordan 12 low and a Jordan 1 low) before the game before ultimately choosing the mock of the Off-White inspired Jordan I’s. The Jordan I is one of Jumpman’s most iconic silhouette, and it was recently given the Off-White treatment by designer Virgil Abloh. Abloh’s design has been worth thousands in the resale market and is innovative in how it tears down and reconstructs the historic sneaker.

While Mathieu would like to have another shot to snag one of Brady’s throws, he can’t regret the heat on his feet.

Juan Thornhill‘s cleats are instantly iconic. In a year where a playoff game was televised on Nickelodeon, what better way to bring back childhood nostalgia than customize a pair with SpongeBob?

In the episode these images are from, Spongebob Squarepants and the Bikini Bottom gang all are a part of the halftime show. They couldn’t have been more weird than The Weeknd was, right?

Antoine Winfield Jr. wanted to be sure and honor pops with his pair of Nike Vapor cleats. Jr. is a Super Bowl Champ, Winfield Sr. is a multi-time Pro-Bowler… While we’ll let them work that fight out at home, we can all agree these sneakers are sweet, right?

Because what could be more Tom Brady than having himself painted on the side of his cleats? In all seriousness, while he doesn’t have an extensive cleats line, this feels like when Michael Jordan wears his own custom-colored Air Jordans or when LeBron James wears one of one LeBrons. Serena Williams gets her own personal shoes from Nike Tennis, so why shouldn’t the best Quarterback of All-Time? Sure, they don’t look like sneakers, but… who cares?

Now, Jordan, James, and Williams don’t have their faces painted on the side of their Super Bowl cleats… but is there anything truly like the Super Bowl?

For more of my writing on sports, sneakers, and the Houston Rockets, follow me @painsworth512, or just check out what I’m wearing at my day job @TeachInKicks101, and give our podcasts “F” In Sports and “The Midweek Midrange” a listen wherever you listen to podcasts!