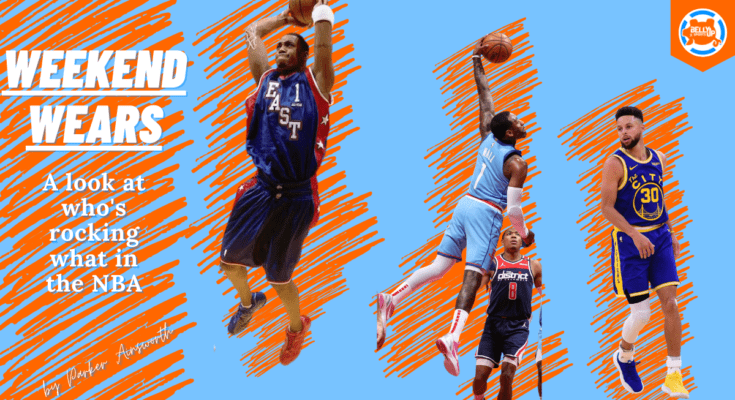 Valentine’s Day weekend is a time for celebrating with loved ones, spending time together… and, usually, watching NBA All-Star Weekend. This usually means that today’s Weekend Wears would be a special All-Star edition, full of unique All-Star game colorways of sneakers worn by the game’s biggest stars.

Instead, as the South faced the first stages of Snowmageddon 2021, the NBA played a fairly normal slate of games. There were lots of eyes on Anthony Davis’ feet… but that was more concern for a calf injury in the Achilles area. Davis’ sneakers though? Those were much less exciting. Davis looks to rest a few weeks… as will his sneakers.

Other than the Davis news, the basketball world felt slow over the long Presidents’ Day Weekend. ____

This weekend did, however, feature different sneaker homages we have to dive into.

In 2004, Tracy McGrady entered his fourth consecutive All-Star game as an Eastern Conference Starter. To match the over-sized, baggy red, white, and blue uniforms, McGrady had to choose which pair of his patented Adidas T-Mac 3’s to wear. On the one foot, he could wear the bright blue patent leather pair to blend in with the blue Eastern Conference uniform. Or, he could wear the radiant red patent leather pair to match the contrasting trim and stripes.

Or, as McGrady showed us, you can choose both. With Blue on his right foot, and red on his left, McGrady scored 13 high flying points and three assists. Though it’s unclear what this move counted as, statistically

In honor of this game, Celtics stud Jaylen Brown donned the exact same sneakers over the recently. Adidas is launching a lot of throwback McGrady sneakers for the public, and it appears the “All-Star” pack may feature one sneaker of each color.

But Brown wasn’t the only player with to pay McGrady homage. Golden State Warriors’ reserve Nick Young famously wore a pair of blue and yellow TMac 3’s in the 2017-18 season as well.

Warrior’s star Steph Curry was clearly taking notes. Curry wore his own sneaker, the Under Armour Curry 8. On the right foot, he went with the same bright blue as McGrady. But on the left? A loud yellow pair wrapped Curry’s foot like a glove.  The Warriors colors look particularly clever for these sneakers. Much like the initial T-Mac All-Star wears, the blue matches the franchise’s colors perfectly. Also like the All-Star sneakers, the yellow shoe matches the trim and striping exactly. Curry’s a very sharp guy, but could the homage below have been intentional? It was over what is normally All-Star weekend.

Listen: LeBron James has been in the NBA so long Nike can retro his own line of shoes while he’s still playing. (Nike- we would like some more Air Zoom Gen 1’s, particularly the purple suede, but would settle for the South Beach 8’s.) So one of the many benefits of being LeBron James? Rocking your own throwbacks.

Over the weekend, Nike gave the Nike Air Griffey 1 the retro treatment. So what did LeBron James do? He dug out the #LeBronWatch 15 “Griffey” for Ken Griffey Jr.’s big sneaker weekend. The shoe used the blank, cloth canvas of the Nike LeBron James 15 to paint the same image of old, classic Nike sneakers. In the spring of 2018, LeBron James would wear one of these unique pairs in a game and there would be a 23-minute “shock drop” on the SNKRS app. Part of the fun was that we got to see who LeBron’s childhood idols were. He did a version of sneakers worn by Griffey, Bo Jackson, Vince Carter, and Deion Sanders (along with other classic “waffle” and “ACG” looks).

Similarly, on Valentine’s day, LeBron James broke out the LeBron 15 “Just Do It.” Now, James is usually a very PC person… but it’s hard to see this messaging as not some crude but hilarious shot at the holiday, right?

John Wall broke out a throwback feeling dunk down the lane against his former team in Washington on Monday night, but that wasn’t the only throwback. Wall also rocked an incredible pair of Kobe VI’s. This Kay Yow colorway is a Breast Cancer Awareness classic, complete with the snakeskin detailing and pink Kobe signature on the back. From the glamour shot, you can juuuuust see the hint of the Kay Yow ribbon on the inside of the tongue. Truly a work of art, even if the Rockets laid an egg.

For more of my writing on sports, sneakers, and the Houston Rockets, follow me @painsworth512, or just check out what I’m wearing at my day job @TeachInKicks101! Be sure to give our podcasts “F” In Sports and “The Midweek Midrange” a listen wherever you listen to podcasts!