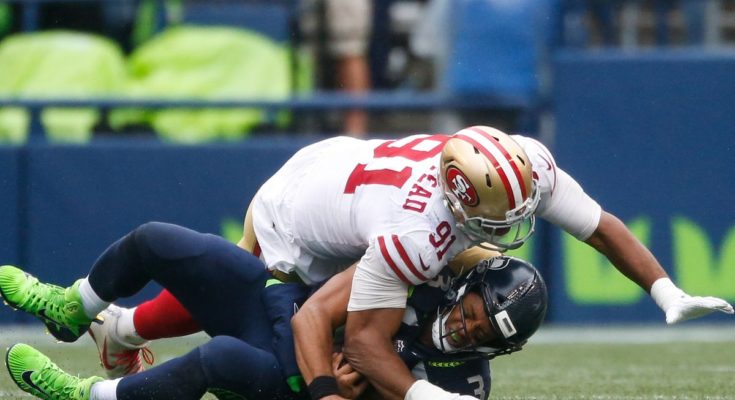 Recent reports indicate that Russell Wilson’s “camp” is not happy with the Seattle Seahawks. Specifically, the ire of his camp points to the lack of protection Wilson has been afforded. It’s no secret that since 2015 the Seahawks offensive line has been literally that… offensive. As Russell Wilson’s gotten older and less mobile, the issues have become more glaring. The 2020 NFL season marked the sixth consecutive year that Wilson was a top-five sacked Quarterback.

Russell Wilson has been sacked 100 more times than any other QB since he entered the league in 2012 (441) pic.twitter.com/oz08ftC30p

Russell Wilson has been pressured on 2,357 dropbacks since he entered the league

After seeing what happened with Andrew Luck and the Colts, you’d think teams would be on high alert to protect their franchise quarterbacks. Or, at a bare minimum, use an offensive scheme that minimizes the issues. When you have one of the five best players at their position, this feels obvious. Sadly the Colts didn’t figure it out until it was too late. As it pertains to Seattle, their offensive philosophy is the same as their best offensive lineman… ancient.

A month ago I wrote an article on why the Seahawks should part ways with Pete Carroll. In short, Pete Carroll is stuck in his ways and refuses to change. When you couple Pete’s recent contract extension along with a new Offensive Coordinator, it appears Pete Carroll is here to stay. So with the issues ongoing and Russell Wilson becoming more verbal on said issues, there’s only one thing his “camp” can do. Demand a trade from the Seahawks.

Why Russell Wilson Should Demand a Trade

Patrick Mahomes, Josh Allen, and Deshaun Watson are rightfully viewed as the present and future of the NFL. Let’s not discount who Russell Wilson is and has been his whole career. He’s the winningest regular-season Quarterback through nine years in NFL history. Currently, Russell Wilson owns the fourth-highest career passer rating only trailing Aaron Rodgers, Deshaun Watson, and Patrick Mahomes. Wilson may be undersized, but he’s one of the all-time greats, and he’s only 32 years of age.

With that being said, Russell Wilson should demand a trade to save the rest of his career. Wilson is on record saying he wants to play for another 10-15 years. If he hopes to do so, either Seattle needs to revamp their entire offensive philosophy (they won’t), or he must demand a trade. Now the odds of Wilson doing so are about the same as the Cowboys extending Dak Prescott. History says that Wilson is quiet, tows the company line, and never says the wrong thing.

However, it appears as if Russell Wilson is getting tired of staying quiet…

If we’re being honest, how could Wilson not be? In his own division, he has to watch two offensive masterminds in Sean McVay and Kyle Shanahan. Across the NFL, he sees Mahomes, Josh Allen, and multiple other teams building systems around their quarterbacks. Meanwhile, in Seattle, he’s been forced into a scheme that literally minimizes him. Seattle did try to buck the trend in 2020 but ultimately reverted to its bread and butter.

So Will a Trade Happen?

My immediate guess would be no. However, given the power of the modern superstar athlete, if Russell Wilson chose to flex his muscle, he’d probably win. That’s why Deshaun Watson will most likely force his way out of Houston. Russell Wilson is a future Hall of Famer who’s in the prime of his career. For the Seahawks to have not made it out of the divisional round since 2014 is nothing short of shameful.

Next season could be the deciding factor on whether we see Russell Wilson play in Seattle past 2021. Luckily for Wilson, when Seattle’s offensive line was healthy this past season, they were ranked in the top half of the league by Pro Football Focus. If they regress and Wilson is once again one of the five most sacked quarterbacks, we could and, frankly, should see him request a trade. The last thing we need to see is another great player forced into early retirement.

The downside to the single-parent household I was born into was that watching sports wasn't really a thing. In fact, I wasn't truly introduced to watching sports and sports media until my mid-teens. That's when I truly fell in love with it all. And it wasn't the X's and O's that won me over, it was the deep-rooted stories of the business, the athletes, and the ever so changing nature of sports that truly intrigued me. As a recent college graduate and Communications major, I hope to put my imprint on the sports media world.