The first game of the season for the Cleveland Browns has come and gone. Unfortunately, it wasn’t a Browns win but, this team played its heart out. The Browns lose week one to the Kansas City Chiefs 33-29. Cleveland lead for most of the game until it was under eight minutes left in the fourth quarter. Although, they couldn’t get the win. But, this team has what it takes to win the division and at least 13 games this season. Here are the Five Takeaways from the Week one game in Kansas City:

What a game for the Cleveland Browns running back duo of Nick Chubb and Kareem Hunt. It seemed like all game that either Chubb or Hunt were just running all over the Chief’s defense. Practically sliced-n-diced them on each handoff. Chubb would finish the game with 83 yards rushing on 15 attempts for a 5.5 average and two touchdowns. Hunt, on the other hand, would go for 33 yards on six attempts for a 5.5 average also with a touchdown. While it doesn’t seem much, the two would just keep the Chief’s defense on their heels. Despite a fumble by Chubb that was knocked out by a Chiefs player’s helmet, he had a very solid game for the Browns. Chubb’s 18-yard run for a touchdown was insane because he practically went untouched as he scored on that run.

Also, Hunt was just jumping Chiefs players left and right. He even managed to jump the defensive line on a two-point conversion attempt to make it 8-0 Browns in the first quarter. The two would just keep eating up yards and extending drives as the game went on. All in all, the duo looks poised to be a two-headed monster all season for the Orange and Brown.

2. Baker Played His Heart Out for the Browns

Baker Mayfield picked up right where he left off from the second half of last season. Mayfield would end the game throwing for 321 yards on 21 of 28 attempts. Plus, he would finish with a QB rating of 97.5 and averaged 11.5 yards per completion. There was a point where he went eight straight throws for completion. Furthermore, he would throw two passes that went for 43 yards (David Njoku) and 44 yards (Anthony Schwartz) that were absolute cannons. Even though he didn’t throw a touchdown, Mayfield played like the quarterback that absolutely set the second half of the 2020 season on fire.

Despite that late interception caused by Kansas City Chiefs safety Daniel Sorenson, Mayfield overall had a solid game. He led the offense to consecutive 75+ yard drives for 3/4ths of the game. The interception was due to Sorenson grabbing Mayfield’s foot at the last second to get him off balance. If it wasn’t for that, the throw could have been better. That interception aside, this game proved that Mayfield is ready for the next step as the Franchise Quarterback that the Browns have been waiting for. Browns fans can expect him to go off in their next week’s game at home against the Houston Texans

When it comes to the Cleveland Browns defense on Sunday, they showed that they still need time to gel. Which in hindsight, it makes sense when they have nine new starters. The additions of Anthony Walker, John Johnson III, Troy Hill, among others, do make the defense better from last year; but they still have time to get fully going. Also, it’s proven that it takes defenses on average four to six games to get fully meshed together. To play their first game against the two-time reigning AFC Champs in the Kansas City Chiefs was a tall task. Although, they did manage to hold their own in the first half holding them to only 10 points. But, that was due to the offense eating up a massive amount of time.

The Brown’s linebacker, Anthony Walker, lead the team with nine total tackles with one of them being assisted. Denzel Ward managed to have a solid game himself having six tackles which lead two to be assisted as well. For the most part, Myles Garrett had a pretty quick game. Other than the sack late into the fourth quarter, it seemed like he wasn’t talked about much outside of his four tackles. Joe Woods’ defensive scheme mainly was rushing four players, which yes it does work, but not against the Chiefs. The scheme, unfortunately, left Patrick Mahomes with too much time to get passes off.

Woods will need to find a way to make adjustments as games go along because, in the end, that style cannot work against everyone. Only time will tell when Woods will make the proper adjustments to help the defense mesh sooner, rather than later.

What’s Next for Cleveland?

The Cleveland Browns’ next game is Sunday, September 19th at home in Cleveland against the 1-0 Houston Texans. The Texans beat the Jacksonville Jaguars 37-21 in Houston. The game will start at one pm eastern at First Energy Stadium. It should be a wild game as the stadium will be sold out for the first time since 2019. Expect Baker and company to come out firing after their week one loss in Kansas City. It has the making for the Browns to go 1-1 after week two. But, it all comes down to the defense meshing well together and the offense to go lights out as they did in Kansas City. All eyes will be on Cleveland Sunday afternoon. 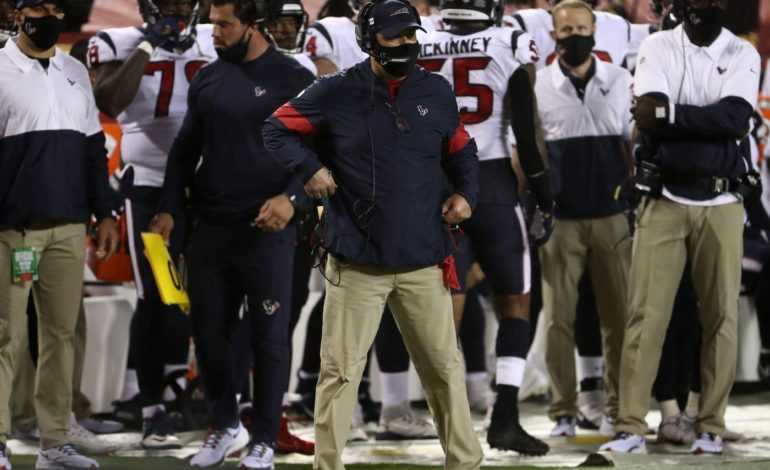 The Houston Texans are Better Than Expected