Hands – Has very sticky hands, on top of phenomenal ball tracking. Had instances of double catches, but generally pulled in every throw in his very large catch radius.

Contested Catch – One of his best traits, he consistently brought in catches in double or tight coverage. He had a few drops when the passes were low and the CB got a hand on it, but with better and more consistent QB play I doubt this is ever an issue.

Size & Speed – Has the elite size/speed combo teams yearn for. Having NFL size isn’t just about height. Having the bulk to a tall frame makes it very hard for corners to eliminate your entire catch radius, as they need to get around you. Much like JaMarr Chase, Burks has elite height and bulk, but Burks is taller and bulkier. Luckily, that doesn’t come with a loss in his speed. While he’s not as fast as Chase and likely won’t run a 4.3, his play speed is above average, which given his size is rare.

Release – Didn’t face much press coverage. On the rare occasion that he did, he seemed adept at using the proper hand checks and quick feet to create some space.

Routes & Separation – His route tree is fairly developed, and he can break off routes with good precision. On the other hand, he doesn’t deploy the head fake at route breaks. He isn’t quick or creative enough at the top to create true separation. Burks also doesn’t separate after the route break either, and NFL corners are stickier than college corners. He did however show great ability to separate on go routes, although not with speed but with great body control and the slight hand check to give him yards of separation.

YAC – Not elite in any regard, but is more than capable of being a possession receiver and a yard creator. He was counted on for many screens. While he’s not exceptionally shifty, he gives great effort and has good vision. His size helps as well.

Football IQ – This is the “Cooper Kupp test”. Kupp has a knack for always knowing exactly where to be and what move to pull to get wide open and find the soft spot of the zone. Burks excels at this (of course nowhere near the level of Kupp, but his talent should still be commended). He knows when to sit on his routes to avoid a cutting defender or cut it short or bounce it wider to get open.

Versatility – Was used as the center of this offense. He has moved all around, as a screen receiver, wide, slot, even half-back, and wildcat.

Combine – Burks was one of the biggest “losers” of the Combine among all Wide Receivers. While no one expected him to have blazing speed, a 4.55 40 is slower than expected. He also ran only a 7.28 3-Cone, which is very slow for a receiver. He seemed to be a non-agile receiver, which puts him in the same camp as Drake London. The difference is, London is a master at making contested catches and playing bigger than his size, while Burks didn’t play nearly as big as London.

Simply put, Treylon Burks is a rare WR prospect. Many WRs are lean and quick, or thick but slow. Burks has the rare combination of above-average speed and a massive frame.
Burks showed great leadership, choosing his hometown Arkansas over higher-ranked programs, and he burst into the spotlight during his time there. I’d like to think that he single-handedly (it wasn’t the defense, the run game, or the QB play) led this team to multiple Top 25 appearances, as he was their entire offensive identity.
I am, however, a bit more cautious about his outlook. His struggle to consistently separate is a real issue. Most elite NFL WRs are precise technicians in their route running. His poor Combine performance also brought up many athletic issues.
However, it’s hard to bet against a rare talent like Burks. It definitely didn’t work out when I was cautious about JaMarr Chase (one of my worst Draft takes). If there’s a lesson to be learned it’s that size + speed is deadly, even if the rest of the necessary traits are pedestrian. Pair up a receiver like that with a good QB and the sky is the limit. Examples of non-polished athletic freaks include DK Metcalf and JaMarr Chase, who excelled with good QB play.
While being a great prospect, Burks will have to deal with some scrutiny, and seems to have of an uphill battle than we originally thought.
I still believe he will be a great pro, but I am not as convinced as most.

See Drake London’s overall ranking among other players on my Big Board. 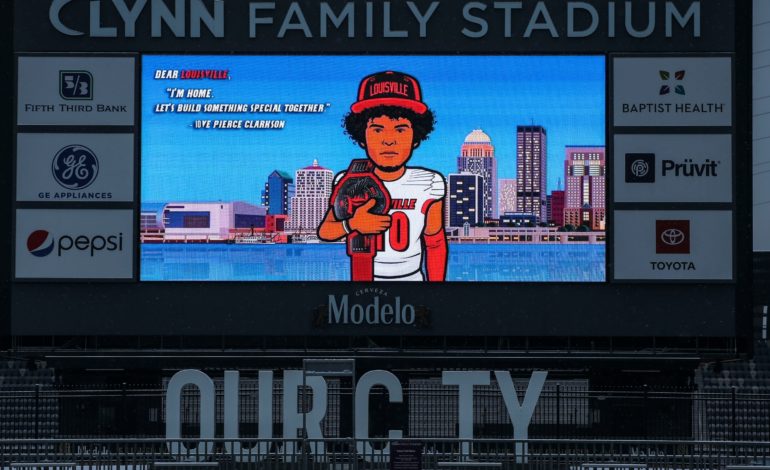 2023 Recruiting Class Headed Towards Being the Best in Louisville History