Agility – Chris Paul is a big and bulky blocker, and while he is pretty nimble for his size, he’s still clunky. He doesn’t have great athleticism or agility, and it shows.

Power – On the other hand, he uses his size and bulk to be a menace. His upper body strength is a force to be reckoned with, and unless he uses terrible leverage, his anchor and leg drive are dominant as well. Paul packs a ton of power in his frame, the key is learning how to use it properly.

Blocking in Space – Truly a liability. Any time he had to climb to the second level he was completely lost. Staying in front of quick and shifty defenders on the second level proved very difficult, and if they saw him coming, they could evade him completely.

Football IQ – Not ideal. While there were a few instances of good identification of blitzes, and a good assignment switch-off, he faltered too often. Many blitzers managed to get past him before he noticed. This is especially interesting given his academic achievements. He’s no dummy.

Run Blocking – In this regard, Chris Paul is a dominating force. He uses his size and his leg drive to blow open running lanes. His upper body strength comes in handy, as he loves to chuck defenders off him. Not nearly as much as his teammate Tyler Smith does, but plenty in his own right.

Lateral Mobility – Better than expected for a player of his size. He has a good kick-step, and for his size, he is largely a smooth mover. Still, it’s not nearly enough to keep up with the quickness off the edge. He consistently got beat around the edge and inside, showing he struggles mightily to stay in front of quick pass-rushers.

Hands – Chris Paul plays with a precise and methodical hand strike. He is a true student of the game, and when he can get into close quarters and control the situation, he has answers for any move a defender will throw at him.

Pass Sets – When stagnant, Chris Paul will devour you. Bull-rushing is completely useless against his bulk unless the defender can get leverage. When Paul is beaten off the snap, he plays a bit too high, leading to him being more vulnerable to a bull-rush. Still, the bull-rush and leverage would have to be impeccable, as he is not easy to move. Although he gets beat with quickness and counter moves often, he is so large he can engulf defenders at times. If the defender doesn’t have a running start, trying to use moves to get around Chris Paul is hard, as his large frame is impossible to get around.

Versatility – Despite playing at Right Tackle in his last two seasons for the Golden Hurricane, I think he is best suited for a Guard spot. He even has the experience, having played there in his first two years. The one concern, however, is his fit in either RT or G. He doesn’t have the quickness or lateral mobility to play Right Tackle, and he will get demolished there at the NFL level. On the other hand, he doesn’t have the cerebral processing to handle the mess and confusion of the inside.

Combine – Most of Paul’s numbers were fairly average, other than his shocking 4.89 40. That is a ground-breaking number for a player of his size. For some reason, the Georgia Combine standouts get all the praise, but this number is equally impressive. He did measure smaller than I originally expected, but if he transitions to Guard that could work in his favor.

Chris Paul is a fascinating prospect in many ways. Aside from being a very active advocate of racial equality, he is also an academic standout, working on his MBA. His smarts and maturity are truly enticing.
As far as his game goes, there are many areas of concern. He has little to no successful lateral mobility, he can’t block in space, and his identification is an issue. I can’t imagine him having success at Tackle in the NFL, and at Guard, his blitz comprehension could prove to be a liability.
That being said, there is also a lot to like about Paul. With his massive size and immense power, he can be a dominant force on the inside. While his actual Combine-measured size isn’t enormous, he plays much bigger than that. That is especially intriguing if he were to kick-in to Guard.
Chris Paul has a ton of potential, and if switched to Guard, he could have a very nice career ahead of him.

See Chris Paul’s overall ranking among other players on my Big Board. 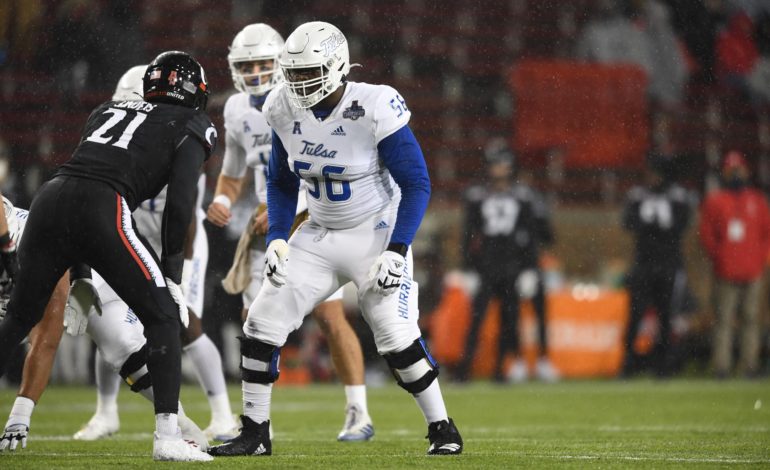