Vikings Draft for Their Competitive Rebuild

In my earlier articles, I have reported on the changes at the executive, coaching, and player levels for the Minnesota Vikings so far this off-season. Next, I would like to focus on the upcoming NFL draft and moves the Vikings could make on draft night that would make them competitive in 2022 and beyond. But first, a few last thoughts on free agency.

Garret Bradbury is the not answer for the Vikings at center. It pains me to say that. No one was a bigger advocate for drafting this guy four years ago than me. He was the exact intelligent, mobile player that would lead the Vikings’ offensive line for years to come. I was wrong. While he is a serviceable run blocker, he is not strong enough and too undersized to handle the more aggressive, physical defensive tackles in the NFL

The Minnesota Vikings’ Problem at Center

The Minnesota Vikings brass believes that in a new system, Bradbury can be a productive player. This is a mistake that also stunts the development of left guard Ezra Cleveland and whoever ends up playing right guard. That is why I have been clamoring for the team to sign free-agent J.C. Tretter. Although he has had knee and ankle issues, he still remains one of the top-performing centers in the league.

He would bring the Vikings stability in this crucial position, and also give them time to develop their young talent in the middle of their line. He is a much better solution than any of the centers who are available in the draft as most of them are undersized and have deficiencies similar to Bradbury. This is the only free-agent move that makes sense for the cash-strapped Minnesota Vikings.

When you consider the abundance of needs that the Vikings have both on offense and defense, my conclusion is their best course of action is to trade out of the number 12 spot in the first round to acquire more picks later in the draft. I ran some computer models to see what this would look like. I also incorporated ideas from some of my cohorts here at Belly Up Sports for the player selection process. Let’s have some fun with this and see what the crystal ball has to say about the Vikings draft.

The 11th pick has been made in the first round of the 2022 NFL Draft and the Vikings are on the clock. With 30 seconds left before the pick is due, Commissioner Roger Goodell announces a trade. The Minnesota Vikings will send the number 12 pick to the Houston Texans. In return, Houston sends the number 13 and number 80 picks to the Minnesota Vikings. A very intriguing start to the draft for the team in purple.

Shortly thereafter, the Minnesota Vikings are on the clock with the 13th pick in the first round. Once again the Commissioner announces that the Vikings have traded away their pick. This time their trading partner is the Dallas Cowboys. For this transaction, the Vikings send the number 13 pick to the Cowboys for their number 24 and number 56 picks, and also Dallas’ 4th round selection in the 2023 draft.

But the Vikings are not through with their wheeling and dealing. A half an hour later Commissioner Goodell stands at the mic and announces that the Minnesota Vikings have made still another trade. This time, they ship their number 24 pick and a 7th-round pick in the 2023 draft to the Atlanta Falcons for the 43rd and 58th picks in the draft. The legend of Krafty Kweisi Odofo-Mensah is born.

So, the night ends and the Minnesota Vikings have traded themselves out of the first round. The fans back in Minnesota are anxious, angry, and confused.

The draft re-starts on Friday night and Vikings fans wait for their first selection of the draft. “Please football Gods. No more trades” they cry. And as if divine intervention intercedes, the Vikings select their first player of the draft. With the 43rd pick, the Minnesota Vikings select, Boye Mafe, edge, from the University of Minnesota. Solid pick at a position of need with a hometown feel. Should be an excellent rotational player coupled with Danielle Hunter and Za’Darius Smith. A few cheers can be heard echoing from the Vikings fan section.

David Ojabo has an immense amount of potential, and the Ravens could potentially be the team to unlock it pic.twitter.com/SsvpFHAhQ1

A few minutes later the Minnesota Vikings stun their faithful with yet another trade. This time, they trade their number 46 and 250 picks in exchange for the number 57 and number 89 picks of the Buffalo Bills. Vikings fans’ heads are spinning around like Linda Blair in “The Exorcist.”

No. Not Another Trade

Minnesota fans are still trying to catch their breath as the time comes for the Vikings to make the pick at number 56. Incredulous fans drop to their knees as another trade is announced. This time, the Minnesota Vikings trade their number 56 and 156 picks to the Atlanta Falcons for picks number 74 and 82. Crestfallen Vikings fans come to the ghastly conclusion. Their team is going to trade their way completely out of the draft. Some are even calling for the return of Rick Spielman.

A week before the #Vikings kick off their first draft of a new era, how would you rank every Rick Spielman 1st round pick?

Just then Krafty Kweisi’s evil genius plan comes to the forefront. With the 57th pick in the draft, the Minnesota Vikings select Cam Taylor-Britt, cornerback, University of Nebraska. Physical corner with great athleticism. Now we’re talking. They immediately follow that up with the selection of linebacker Leo Chenal out of the University of Wisconsin at number 58. A player that has tremendous run-stopping ability and also the skills to be a good cover man in the NFL. And the night is far from over.

Center of the Future

The Minnesota Vikings’ next turn to the offensive side of the ball with the selection of center/guard Cole Strange from the University of Tennessee-Chattanooga with pick number 74. He has good balance, coupled with great footwork and strong hands. Whether the team acquires Tretter or not, this is a smart pickup.

Just to mess with people one more time before the draft ends, the Vikings make one final trade. They send pick number 77 and their 6th round pick in the 2023 draft to the Tennessee Titans in exchange for the Titan’s number 90 and number 131 picks. Whew!

The Minnesota Vikings Get Down to it

At the 80th spot in the draft, the Minnesota Vikings select cornerback Tariq Woolen from the University of Texas-San Antonio (UTSA). A big cornerback with freakish talent, he’ll need some time to develop. But he projects as a dynamic, long-term starter. They follow that up at pick number 82 with the selection of Nick Cross, safety, from the University of Maryland. The Vikings are one Harrison Smith Covid diagnosis or injury away from total disaster at safety. This hard-hitting speedster looks like the heir apparent.

At pick 89, the Vikings select tight end Cade Otton from the University of Washington. He combines strong blocking skills with tremendous red-zone catching skills. With Tyler Conklin gone and the still healing Irv Smith, this is definitely a position of the need for the purple.

Adam Thielen, one of the best redzone targets/route runners pic.twitter.com/zKIR8X1b8x

Next at pick 90, the Vikings choose Adam Thielen’s successor, wide receiver Alex Pierce from the University of Cincinnati. While still challenged as a route runner, Pierce is a strong, sure-handed receiver who should find his way to the starting lineup in a year or two. This ends night two for the Minnesota Vikings at the draft. For a team that started the proceedings with only three picks in the first three rounds, they cap their night off with their eighth pick of the draft.

With pick number 131 in the fourth round, the Minnesota Vikings choose Woolen’s teammate, offensive lineman Spencer Burford from UTSA. Burford has the ability to play both guard and tackle and he will add much-needed depth to the Vikings’ leaky offensive line.

So, there it is. A path forward for the Minnesota Vikings. We shall see what happens this Thursday when the Purple and the rest of the NFL conduct their annual college draft.

Two quick reminders. Please look out for my complete wrap-up of the Vikings selections in my post-draft article. Also, I will be among many analysts critiquing the draft for the MD’s Fantasy Football podcast. I will be analyzing third-round picks 71-76. Please tune-in. 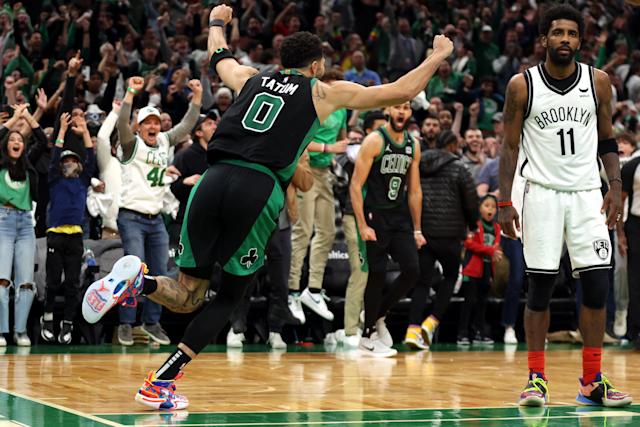 Kyrie Irving vs. the Boston Celtics, a Rivalry the NBA Desperately Needs to Embrace