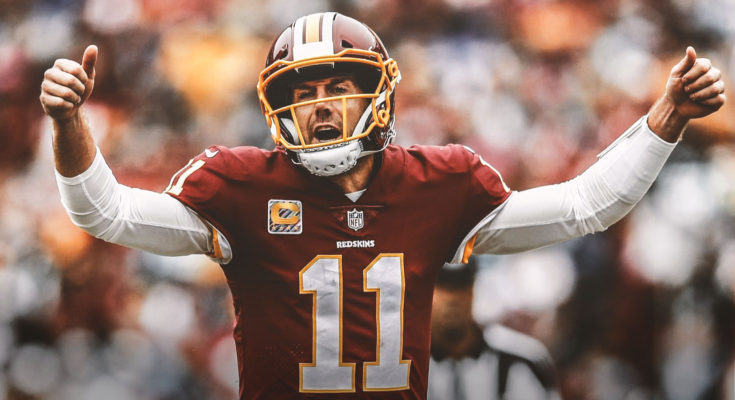 Back From the Grave

Alex Smith was activated from the physically-unable-to-perform list today, a feat that many hadn’t even considered possible. Smith had suffered one of the worst injuries we’ve ever seen in the NFL. In a routine play, he was brought down awkwardly against the Texans on November 18th 2018. The angle of the take down, combined with the forces of the players, shattered Smith’s leg into a limb that was almost unrecognizable.

On the same exact date in 1985 Lawrence Taylor shattered Joe Theismann’s leg, effectively ending his career. With Smith’s injury, devastation had once again struck Washington. The same injury as Theismann, a broken tibia and fibula, left Smith fighting for his life. The comparison between their two injuries are so eerily similar it’s scary. Both were tackled at the 39 yard line, and lost 23-21. Both were injured at the hands of a three time Defensive Player of the Year, and had their Pro Bowl left tackles out due to injury. I doubt Smith had these similarities in mind when he began recovery to save his leg, and save his own life.

The injury itself required significant surgery and rehab, but when it got infected things became even more complicated. This infection threatened Smith’s leg, and the doctor’s seriously considered amputation as a possible alternative. His injury was that of someone in the military, rather than someone in sports. Seventeen gruesome surgeries later, Smith’s leg was at least intact, and his road to recovery had begun.

What comes next for Alex Smith? He has already done the impossible. His road to recovery is unlike anything we’ve ever seen in professional sports. Usually when someone survives an injury this severe coming back to play isn’t even on their radar, and there is absolutely no fault in that. Smith had it in his mind that he was going to come back, despite the odds that were stacked against him. If his return is incredible, and he brings the Washington Football Team past expectations, it will truly be unbelievable. If his return his lackluster, and he struggles to play well, it will truly be unbelievable anyway. The fact that he is even in practice taking reps is a colossal victory, and extremely improbable.

It doesn’t matter if Smith comes back and performs well, he has already beaten the odds. The chance of amputating his leg wasn’t just a passing alternative by the doctors, it was a serious real possibility. His life was on the line, and he is now able to play football again. Truly amazing, amazing stuff. No one is expecting Alex Smith to come back from this injury and set the league on fire, but he will be crucial to a Washington team that seems to be in a metamorphosis as a franchise. With the name change, a new head coach, and a bunch of promising young players, there is a clear role for Alex Smith on this team.

Previously I had talked about what the name change means for The Washington Football team in an article about Dan Snyder. There is a serious metamorphosis going on with this team, whether Snyder likes it or not. Dwayne Haskins is the new young quarterback under center, a first round pick, a player in which they have vested interest. They have a new head coach, Ron Rivera, who has years of proven success in this league. They have Terry McLaurin, Chase Young, Jonathan Allen, Duron Payne, and several other promising young players.

Derrius Guice was one of these promising young players, but is rightfully no longer part of the team. Released due to awful domestic violence, which is absolutely unacceptable in any situation. With all of these changes, and Guice being let go right away, there is a clear metamorphosis going on with this team. Alex Smith will prove to be cubical to this change. While people may say he is just a “game manager”, there is no denying the consistency in Alex Smith’s career. Being taken first overall in the 2005 draft, he has naturally been juxtaposed with Aaron Rodgers his entire career. He isn’t Rodgers, and he has definitely heard this his entire career. He’s not Rodgers, but no one can knock his consistency.

He’s a proven winner, both on and off the field. Throughout his career he has made three Pro Bowls, with five playoff appearances. Patrick Mahomes would tell you that Smith was also extremely helpful in his development. While Smith may not become the starter in his return to the game, he will serve as the ambassador of consistency to a team amidst so much change and unknown. His character and experience will prove vital for this team’s growth. It’s not impossible that he takes the starting job, as he has already proven to be able to beat insurmountable odds. An amazing story, everyone is rooting for him, and I can’t wait to have a chance to see him play the game he loves again.