Accuracy – Very inconsistent. Showed flashes of phenomenally placed throws, but generally was off, and more often than you’d like he was way off. Interestingly, his accuracy improves on the run, which could work in his favor.

Arm Talent – Adequate in this area, doesn’t have a cannon but can make throws down the field. Threw a lot of wobbly passes, especially when he needed to throw balls with velocity. This was likely the source of his struggle to zip balls into tight windows.

Field Vision – Goes through his progressions very well. He occasionally missed open receivers, but he usually had no problem finding the open receiver. He had a problem seeing past the open receiver though, once he got a glimpse of him, and better DBs (such as Ole Miss and Syracuse defenders) used this to bait him and intercept his throws. His pocket presence was great, constantly evading tackles you thought he wouldn’t even see.

Mobility – This is his trademark. Few in CFB can move as he can. He does lack the ability to stop quickly and accelerate when changing direction, leading to a lot of gang tackles, but he is very special as a runner. He consistently found the open holes and lanes to exploit.

Decision Making – He rarely threw check-down passes, even when it was clear that was the best move. This isn’t uncommon with mobile QBs, as they can generally create as many yards on their own as a check-down would, so they may as well extend the play and hope for a deeper pass, although that didn’t usually work out for Malik Willis. His most successful runs came on designed runs or immediately stepping up in the pocket. When he was forced to improvise, he seemingly got sacked on half of those plays.

Anticipation – Willis rarely threw to a receiver while in the process of getting open, and generally waited to see the separation. This led to many late throws, that although most still were completed, NFL DBs will feast on throws like that.

Mentality – Seemed to give up on many plays when his team consistently let him down. To his credit, his OL gave up constant pressure, and he had countless big TDs called back on penalties. However, I would have liked to see a bit more leadership rather than frustration.

Combine – Malik Willis was one of the biggest Combine winners. Not only did he stun scouts at the podium with his knowledge and leadership, he even gave his supplies to a homeless man outside the facilities. This was a rare showing of maturity and great character. He also showcased a great arm in the passing drills, and possibly vaulted his stock into the Top 2 picks.

Malik Willis was very hard to comp. Lamar Jackson and Kyler Murray are very popular comps, but I don’t like those for two reasons:
1. He isn’t nearly the dynamic runner the other two are. Both are able to stop on a dime and then accelerate past you in seconds, which Willis can’t. They are also much faster than him and can get out of “phone-booth” situations (one defender directly in front of him), which Willis struggled with as well.
2. He doesn’t have the arm strength of Lamar or the accuracy of Kyler.
His play is very similar to Tyler Huntley. They are both great scramblers, and can throw well on the run, but aren’t elite ball carriers. Their accuracy is hit and miss, with the occasional perfect throw but many head-scratchers.
At best, I think Willis could have a similar NFL play-style to Jalen Hurts, despite being smaller than him. Hurts runs the ball like a bully, and while Willis isn’t that type of runner, he is bigger than he plays. Both are limited passers, very inconsistent accuracy-wise, but great runners, which boosts their value drastically.

Malik Willis is an extremely fascinating prospect; his draft range is possibly the largest in this entire draft. I wouldn’t be surprised if he was drafted in the Top 15, but he could also very likely slide out of the Top 30 picks. I can’t see him sliding much farther than that though, as he has a few elite traits.
Most talented coaches can turn major flaws into average qualities, but certain traits such as elite mobility and arm strength can’t be taught. Willis is often compared to Lamar Jackson and Kyler Murray, and while I don’t fully agree with that comp, it shows you the level at which his mobility is regarded.
Unfortunately for him, every other aspect of playing the QB position needs serious work. He doesn’t read the field well, anticipate windows, or throw with consistent accuracy.
I keep getting pulled in by the occasional jaw-dropping throw, and he’s had a bunch of them. For that reason, I think once you get out of the first round Willis is a must-have QB and is worth the risk.
Impressive Senior Bowl and Combine performances boosted his draft stock immensely, but I still have my concerns. Despite his impressive performance, he didn’t correct any of the issues I previously noted.

See Malik Willis’s overall ranking among other players on my Big Board. 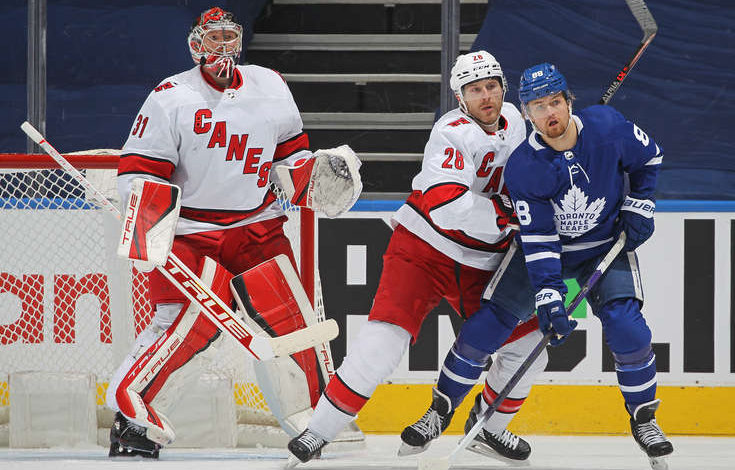 Carolina Escapes Ontario with at least a Point